On my way to the bank this morning I noticed a large gathering of Vietnamese people huddled around something on the road.  From the intensity of their interest I thought it might be a puppy or some injured animal.  As I passed I realized it was a crab. 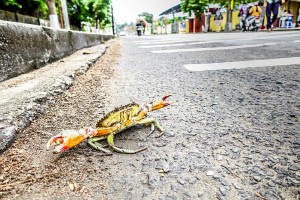 Returning from the bank I looked out for him. I don’t know why. What can you do for a crab? Still his plight had affected me; a little fellow in the middle of a busy road, in so much danger and so far away from home.

To my surprise he hadn’t been flattened or lifted for lunch. He was still there, repeatedly turning around with outstretched pincers flaying as traffic whizzed by narrowly missing him. I got off my bike and approached him. In a minute he was walking sideways towards me, squaring up, ready for battle – such bravery.  I knelt.  He stopped, motionless.  His round, red eyes on thin black stalks, alien-like, moved and swerved, adjusted and focused – on me. We stared into each other’s eyes. 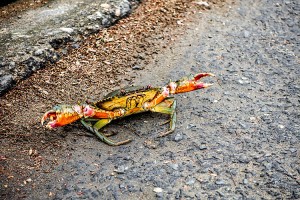 What did I do? I took photos. Clicking away as he watched me from his hopeless situation, I became attached to this little fellow; lost, no way home, no hope.

So clicking and clicking as my mind kept on ticking, what could I do, with a crab?  And how could I leave him here?

Then over they came, two Vietnamese youths aged around 17, with their sticks; straight at my little fellow.

Whirling 280 degrees towards the next unbeatable enemy, my crab squared up, ready. But for what, what could he do?  For them he was tucker and his time was up.

But humanity shows itself at the oddest of times, for the oddest predicaments and creatures.  Bending down the two boys spent 15 minutes trying to get my crab onto their sticks, dodging traffic and dodging razor sharp pincers because by now crab was fed up, feeling agitated and very crabby.  Failed attempt after another, painstakingly they tried until…success.  Clinging angrily to their stick they lifted him, got him in the right hold and placed him, gently, on to the path.

‘NO!’ yelled an older Vietnamese man from across the street – a parent? More shouting in Vietnamese; oh no, they’d been told to get him! Obediently, as Vietnamese children tend to be, they bent again with their sticks and catapulted him into the green woody field away from harm.

They smiled at me, the man across the street waved at me. And I encountered one of the most uplifting experiences I’ve had to date in this unpredictable and oh so wonderful country, Vietnam.

Primarily a playwright, Sharon has written for magazines and newspapers in many parts of the world. The author of two books, she is also a co-founder of Hoi An Now.

Vietnamese Zodiac: The Dark Side

Ever wonder why zodiacs all over the world only have good things to say about everyone? Even faults are seen as positives as everyday reality goes out the window. You have to wonder where all the misery, war and poverty in the world comes from when reading these 'fairy tale'-like descriptions where everybody is smart, compassionate and talented. This is a good marketing ploy that sucks in readers but it's not much use to anyone.

For those who want to see wild birds and go deeper into nature's wonders, the common advice is (especially in Vietnam): ‘Go far from here! Find a National Park, a nature reserve or the rainforest wilderness of the mountains!’

So there you are, stranded under some old town shop front awning, wondering whether the downpour is ever going to cease. It's Hoi An's Rainy Season. Every minute a smiling peddler (where do they keep coming from?) approaches you with the aim of selling a ‘raincoat’ – a thin plastic poncho that bears the semblance of a life size condom.