About Hoi An Beaches

Hoi An’s beaches are an essential stop during the roasting summer months. Whether you want to boogie the night away to live tunes at a beach bar or simply relax and enjoy the rhythm of the waves, beaches in Hoi An have it all.

There are two major beaches in Hoi An: An Bang Beach and Cua Dai Beach. Cua Dai Beach was the more popular place for beach lovers but due to significant erosion much of this once beautiful beach washed away. Rehabilitation at Cua Dai has been extensive however and Cua Dai Beach is now poised to reclaim its status as a key beach location once again.

After the massive bout of erosion that struck Cua Dai Beach in 2014, beach action in Hoi An quickly shifted to An Bang Beach, which was voted one of the top 100 beaches in the world by CNN. Both the north and south sides are lined with bars and restaurants, with many well-geared for English-speaking and European expats and tourists.

Digital nomads will find some excellent places to take their laptop and set up office for the day. Vegans and vegetarians will locate a number of delicious and affordable places to grab awesome food such as The Fisherman Vegan Restaurant and Ken Vegetarian and Coffee. Meanwhile music lovers have several venues to choose from for a night of live music by the waves including Soul Kitchen, Bungalow Beach Bar and Red Lantern Cocktails.

Early morning and late afternoon are the times the Vietnamese favor the beach but other than these peak times there is usually little trouble claiming a spot under a thatched umbrella and settling in for as long as you want if you buy a bottle of water.

There is a greater variety of cuisine and setting at An Bang than at Cua Dai, reflecting the sizable expat community residing there. The touts and urgers are fewer as well.

Hopefully, this homestay-dominated environment will continue to limit larger developments. Existing developments blend well with the casurina-lined shore and An Bang is home to Hoi An’s best live music venue, Soul Kitchen, on its northern fringe as mentioned.

For more information on all you can find at An Bang, check out our comprehensive guide to An Bang Beach.

Hidden Beach was a serene, pristine spot of sand located between An Bang beach and Cua Dai just north of Boutique Hoi An Resort, and one of the most relaxing parts of Hoi An that you could ever sink your feet into. Just as its name suggests, it was relatively uncrowded and undeveloped compared to other sandy beaches, and a little more mysterious and out of sight.

But these days it is hidden for other reasons. Truth by told, the beach erosion and storm damage at Hidden Beach is so significant it’s difficult to imagine that it will ever recover. The once wonderfully chilled, elevated restaurant/bar has all but crumbled into the sea.

Over the last decade a massive area of Cua Đại Beach was washed away by heavy rain, powerful waves, and a striking rise in sea level. Severe erosion began in 2013 with a large portion of the beach disappearing. After years of intensive rehabilitation, by the summer of 2017 parts of the beach and the visitors that once occupied it had temporarily returned.

This process has continued and by 2022 a fairly extensive sandy area sat proudly between two ‘sandbag’ breakwaters.

The warmer months in 2023 and the return of tourism to Hoi An will likely see the return of Cua Dai Beach as a key destination. The infrastructure is already there with several major hotels in the area. There are also many seafood-oriented restaurants operating right on the beach with umbrellaed deckchairs on the sand aplenty.

A similar distance from Hoi An Old Town as An Bang Beach, the rehabilitation of Cua Dai Beach offers new options for beach goers in Hoi An. And importantly, Cua Dai Beach, due to its pre-eminent position in the past, is better serviced by resorts and major hotels than any other area.

Heading south of ‘Cua Dai Central’ a few coves near resorts like the Victoria and the Sunrise provide getaways from the touts and the crowds. If you are prepared to mix it with the local fishermen there are some spacious sandy areas with a handful of deckchairs and umbrellas adjacent to these resorts. And now that Hidden Beach has been washed away, these coves are the best option for those who are looking for a beach all to themselves (almost).

Tan Thanh Beach is south of An Bang, before you reach Hidden Beach. It’s not as popular as the other beaches in the surrounding area, but equally stunning and idyllic. It’s a great place for visitors to stop by for an afternoon laze in the sun (minus swarms of tourists), or to enjoy some local cuisine by the seafront.

Traditionally, many of the establishments were run by locals serving up Vietnamese food, unlike the restaurants along Cua Dai and An Bang which predominantly cater to tourists. These days the tasteful cafe, Sounds of Silence, and bar/restaurants Eight Days a Week and Barefoot Beach Club have been added to the mix and it looks like it won’t be long before the entire strip becomes populated with tourist-friendly venues. New villas and resorts have been opening in recent years and new restaurants are planned. Tan Thanh is sometimes referred to as ‘An Bang 2’ on Google Maps or colloquially as An Bang South.

Like other nearby spots, Tan Thanh Beach is also under threat from erosion and in the winter months the higher seas can wipe the beach out in parts, at least temporarily. It’s likely that it well recover well enough heading into summer 2023 but the threat is ongoing and Hidden Beach, just a few hundred meters south, looms as a stark warning.

The Cham Islands lie off the coast of Hoi An and are in plain sight of all of the beaches mentioned above. Usually visited as part of a day tour, the Cham Islands dish up Hoi An’s best snorkeling spots, and have their own beautiful coastlines.

If staying on the main island you’ll have time to uncover a host of untouched stretches of shoreline. There’re also larger beaches including Ba Chong which have places to eat, as well as sun-loungers, hammocks and beautiful gorgeous sand.

The Cham Islands have the best coral reefs near An Bang and consequently this is where all the scuba action takes place.

Is it safe to swim in the water? +

Yes, but not all year round. There is a serious undertow and once big waves come it’s pretty easy to get sucked out to sea. But this only applies when there is a major swell which tends to happen November to February. This is when you need to be careful. If the waves are up ask the locals first.

Are Hoi An beaches clean? +

Yes, they are mostly cleaned every day. But when there are storms some of the river water and litter gets mixed in (plastics and other problems) and you need to be wary of the water quality then. One of the benefits of recent development has been that there are more and more people focused on keeping things clean. Water quality is fine re bacteria etc.

An Bang has lifeguards. Other venues have locals who keep people awareof issues and resorts have them.

Cua Dai Beach, probably the most beautiful Hoi An beach, suffered badly from erosion. It is slowly returning and many locals and tourists prefer it because it is quieter than busy An Bang Beach. Many venues are planting a ‘green fence’ to preserve beaches and to limit further erosion.

What sort of animals can be found in the water? +

Not many. Fish but nothing dangerous. Sometimes jelly fish bring the sea lice in and that’s about all. But that’s not the norm.

Surfing season begins in October and can continue through to April. There’s not a consistent swell but some days are great and from Nov to Feb you can usually catch something. Up near Marble Mountain the swell can be a foot or so bigger.

Are there any nude beaches? +

Just north of An Bang people used to do it but now it’s too busy. But frankly it’s not wise to go naked as it’s culturally insensitive and offensive to the local community.

What is the best beach in Hoi An? +

It’s horses for courses. Outside Salt Pub at Thanh Thanh for example you can park easily and often have much of the beach to yourself – it’s much less crowded than Hidden Beach for example. Facilities-wise An Bang is king. It has lifeguards and a wider selection of bars and restaurants but it can become packed, especially in the center. There’s live music at Soul Kitchen and Soul Beach at An Bang and a big range of bars and restaurants from the resort-style Shore Club to cheap Vietnamese street-food style operators. Meanwhile, when Cua Dai is winning the erosion battle it can offer a great setting with excellent seafood and a setting equal to any. It’s fun to explore them all – that way you’ll tumble into the setting that’s right for your mood or simply be able to oscillate between venues with a lively buzz and gorgeous solitude.

What is the best time of the year for the beach in Hoi An? +

For surfing in winter – Nov to Feb. But for calm, safe waters when it’s more like a lake than the ocean and rain-free days the summer months come up trumps. Indeed, it’s so hot in June/July/August you’ll be grateful for the wide range of beaches and the warm ocean water temperatures, whether you’re a beach person or not. In these months the water temperature is actually too warm for some of us.

When is the best time for snorkeling and diving? +

April to September when the sea is at its calmest and the visibility is at its best. Especially May to August.

Map of Hoi An Beaches 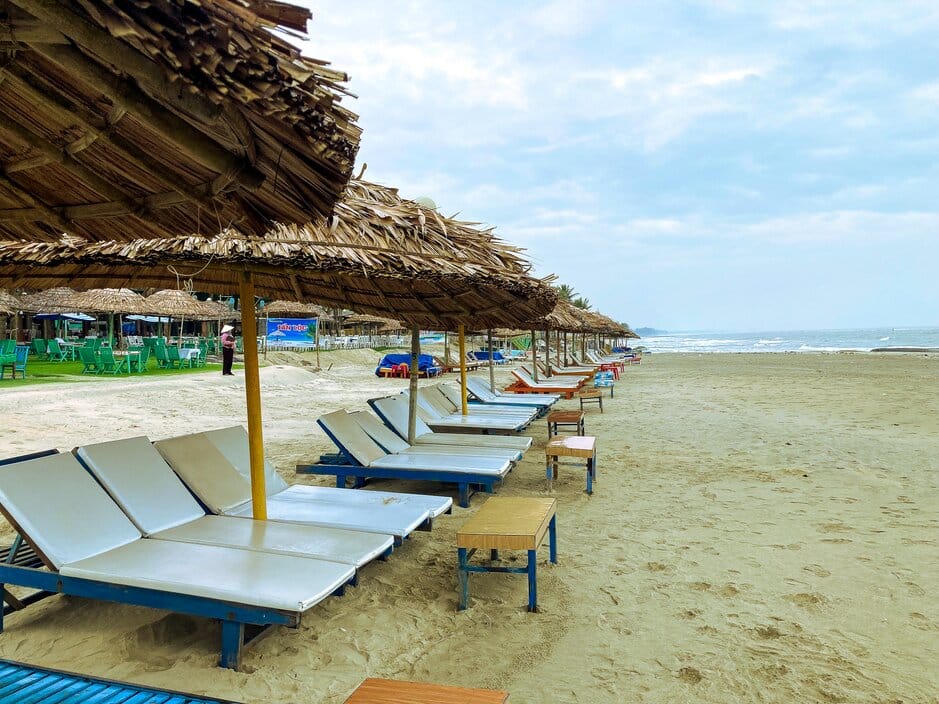 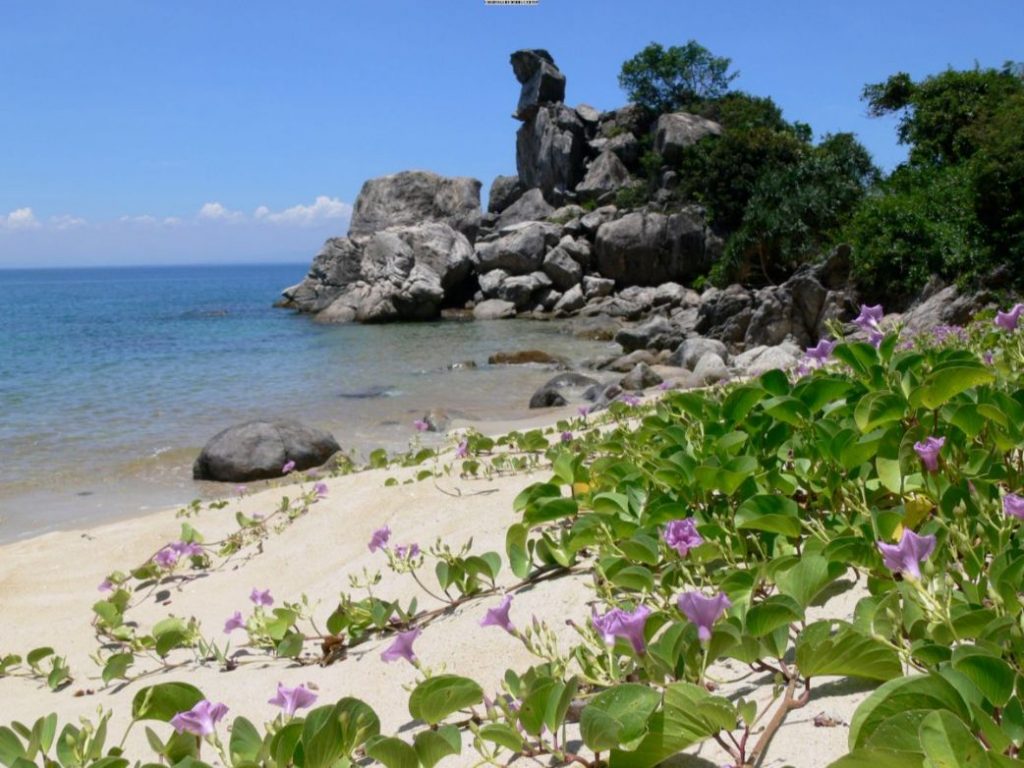 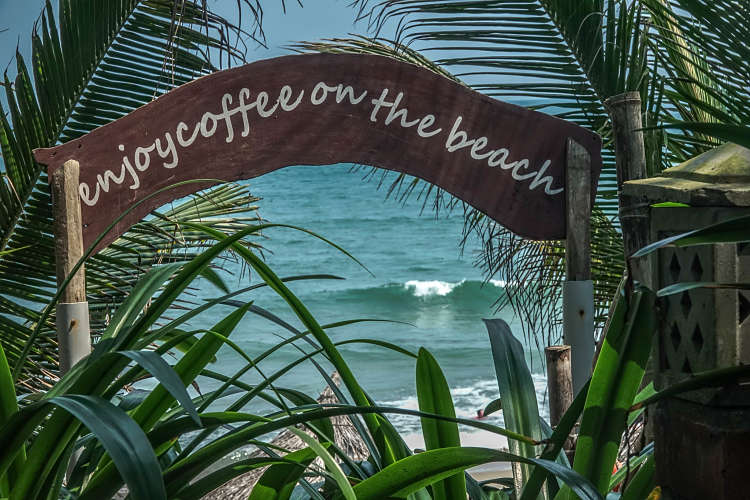 Primarily a playwright, Sharon has written for magazines and newspapers in many parts of the world. The author of two books, she is also a co-founder of Hoi An Now.

Guide to Cooking Classes in Hoi An

Google cooking classes in Hoi An and you’ll drown in choice. Click for a short list of the most entertaining and reliable options in this expanding genre.

Things to Do Read More

Hoi An Food Safari runs an exceptional, personalized food tour in Hoi An with a particular emphasis on street food.

Things to Do Read More